The commanding 20-percentage-point lead that U.S. Rep. Colleen Hanabusa enjoyed over Gov. David Ige in the Democratic primary for governor just four months ago has evaporated, with Ige pulling ahead one month before election day, according to a new Honolulu Star-Advertiser Hawaii Poll.

The Hawaii Poll showing Hanabusa’s suddenly weakened political position comes as Ige generally receives high marks for his handling of severe flooding on Kauai and a devastating eruption of Kilauea Volcano on Hawaii island, events that may have bolstered his image as a competent leader.

The new poll data also suggests the memory of the Jan. 13 ballistic missile false alert that caused panic among Hawaii residents — a scare that appeared to be poisoning Ige’s re-election effort just a few months ago — is fading from voters’ minds as the Aug. 11 primary approaches.

If the 2018 Democratic primary for Governor were held today, for whom would you vote if the candidates were: 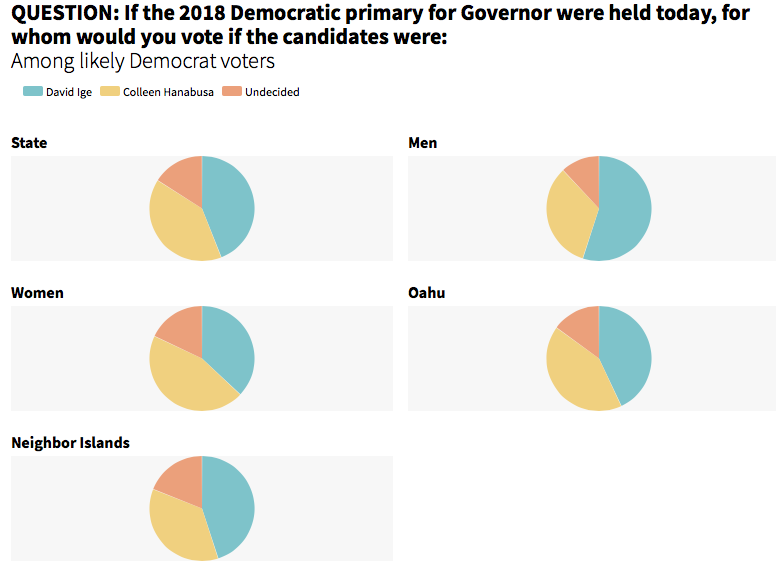 That is a dramatic reversal from mid-March, when just 27 percent of likely Democratic primary voters said they would vote for Ige, and 47 percent chose Hanabusa. Another 11 percent said in March they would vote for former state Sen. Clayton Hee, who has since withdrawn from the race.

The latest poll results show Ige is strongest with neighbor island voters — perhaps a reflection of his performance during the natural disasters on Kauai and Hawaii island — and among white voters and men. The voters are evenly split on Oahu, and Hanabusa is the favorite among women and among voters of Japanese ancestry. 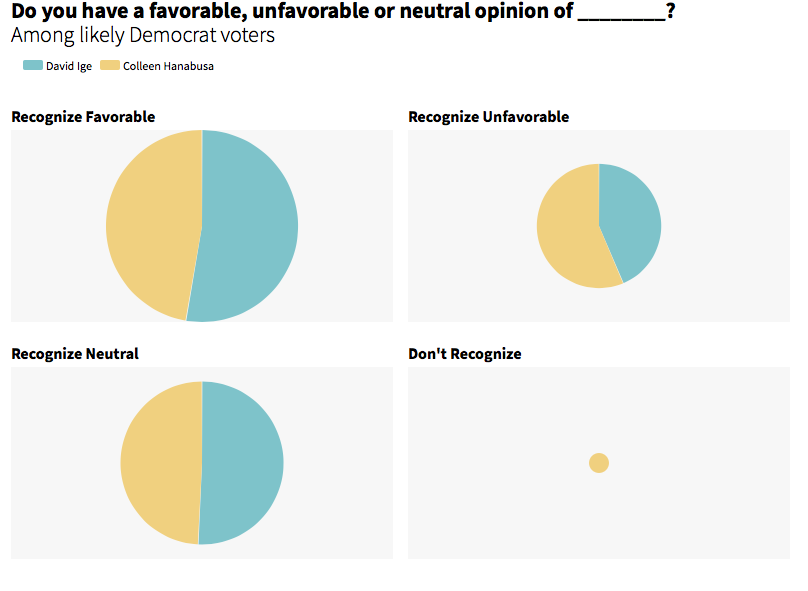 Brad Coker, managing director of Mason-Dixon, said it is “very rare” to see such a dramatic reversal of fortunes for a well-known incumbent such as Ige.

“Typically incumbents poll very close to where their core base of support is,” said Coker. “For someone who’s a governor to be down as low as Ige was several months ago to come back that far, that fast, I honestly don’t know that I’ve ever seen it.”

Coker said the false missile alert that frightened many thousands of Hawaii residents happened about eight weeks before the March poll, and that timing may have given Ige an artificially low standing in the poll results at that time. 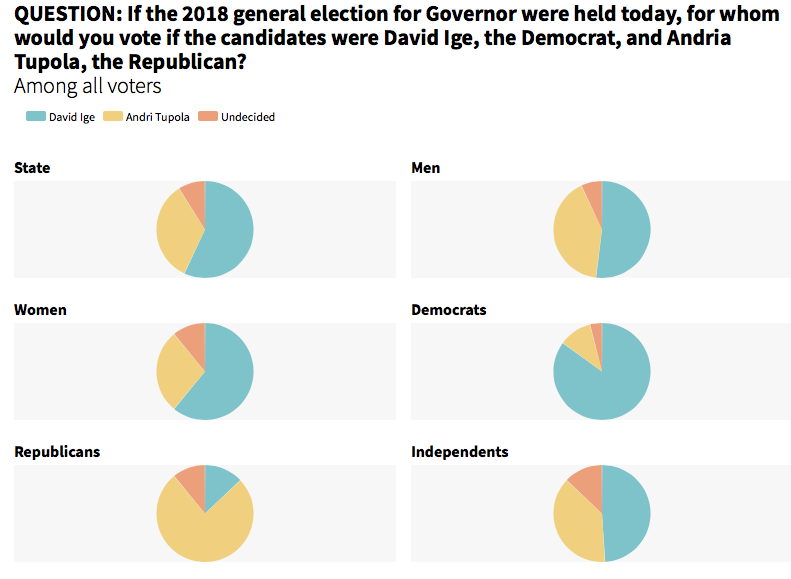 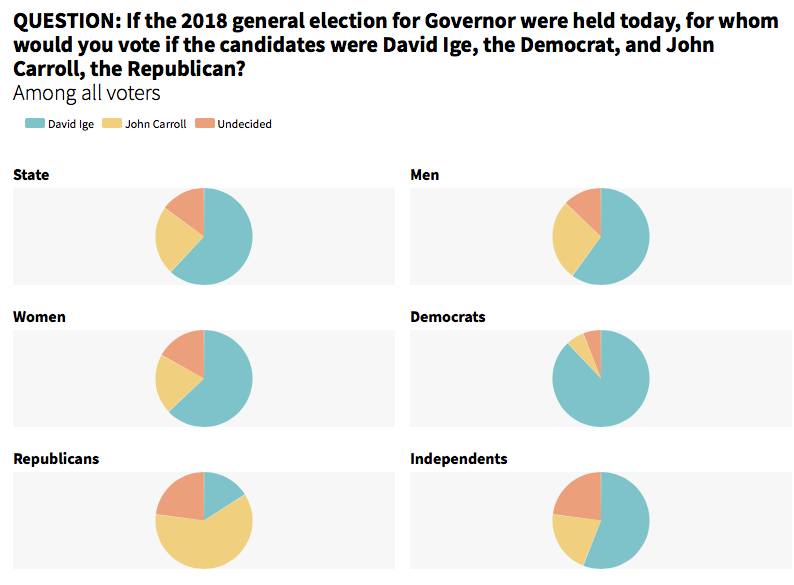 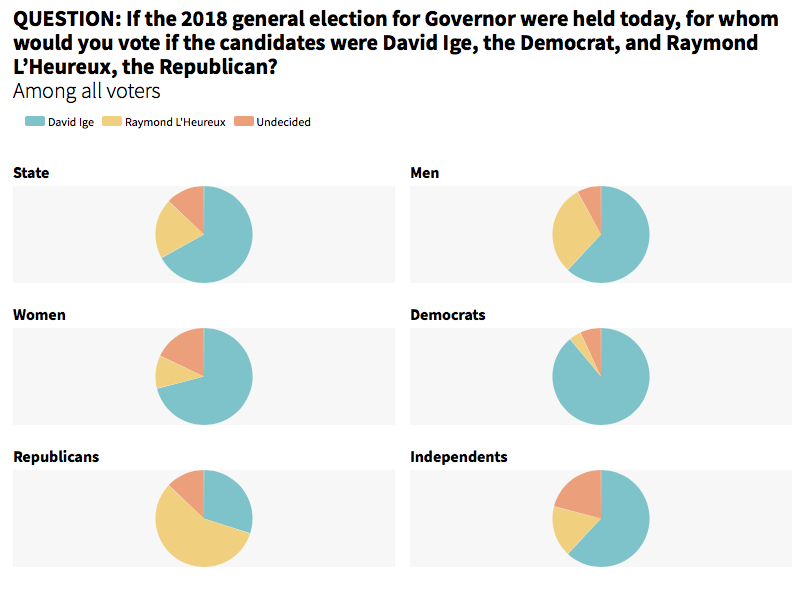 “But even if you factor that in, he was still double-digits down, and now all of the sudden he’s vaulted ahead, and I’m guessing that a lot of it has to do with his handling of the volcano situation,” Coker said. “You’ll find that natural disasters — if handled properly — can really boost a politician’s or elected official’s standing with the voters even if they didn’t like stuff he did up until that point.

Colin Moore, director of the Public Policy Center at the University of Hawaii at Manoa, described the new poll results as “shocking.”

“When you have two very well-known candidates like Ige, an incumbent governor, and Hanabusa, who has been in politics for a long time, you don’t expect this kind of volatility,” Moore said. Most people know these candidates, and Moore said he had expected most people already formed firm opinions about each that would not change so quickly and dramatically.

Moore said the March poll captured many voters who were furious about the false missile alert, “and they seem to have forgiven him.” But Moore also faulted what he described as a poor campaign by Hanabusa this year that is giving the voters little reason to support her. 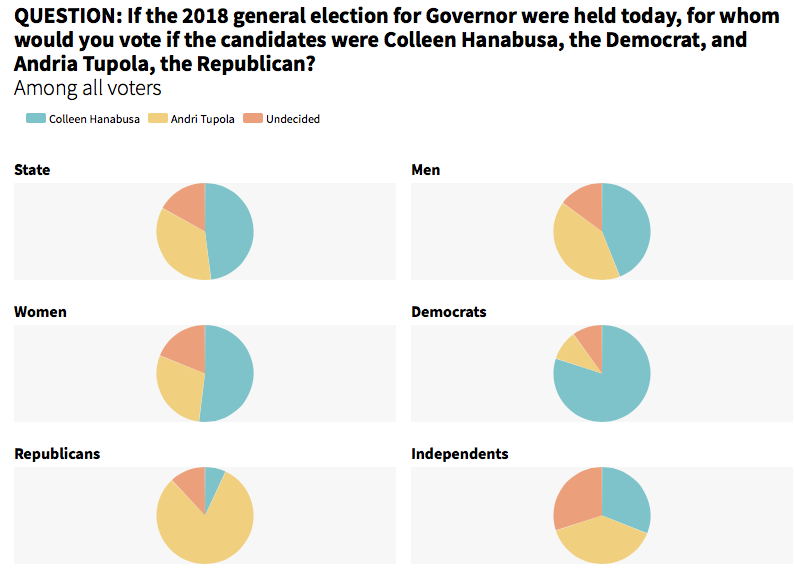 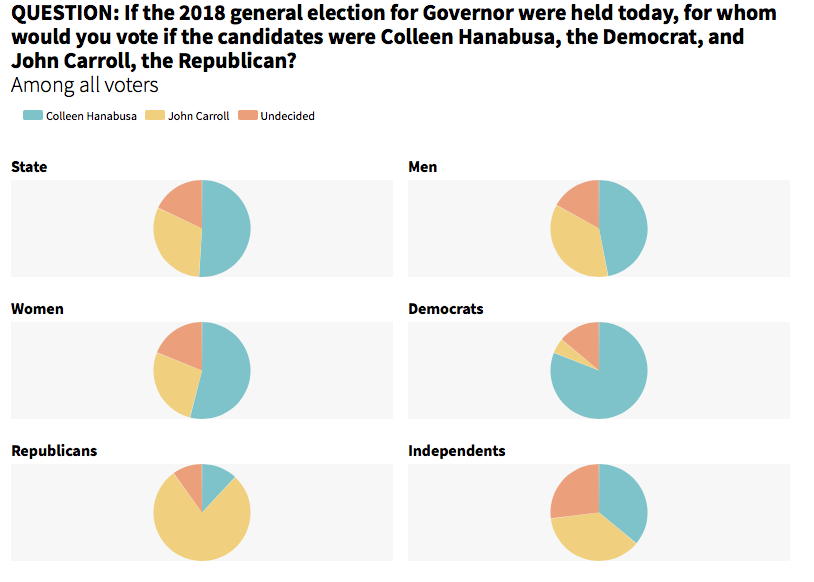 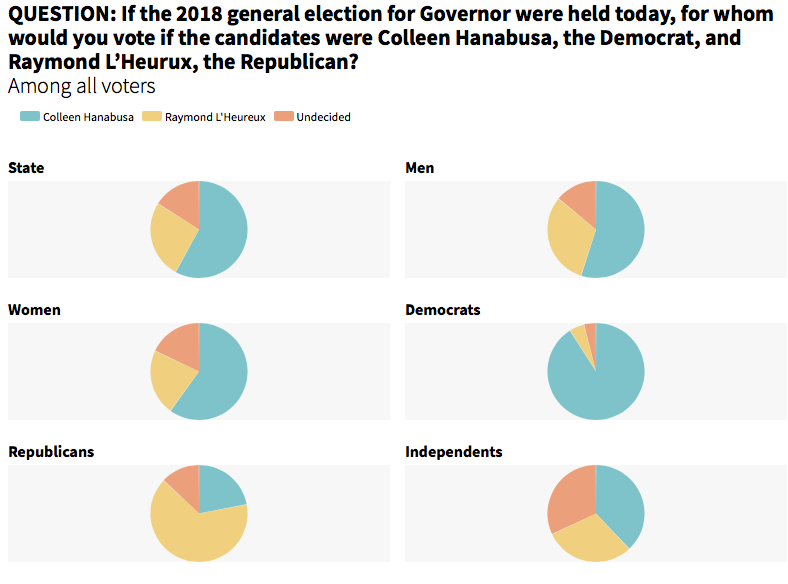 Challenging an incumbent governor at a time when the economy is booming and unemployment is at a near-record low is difficult, and Hanabusa hasn’t offered the voters a simple, clear, central message explaining why they should replace Ige with her, he said.

“I think it has also been difficult to run this campaign because she didn’t resign from Congress,” Moore said. “To run for governor when you’re spending a lot of time in Washington, D.C., is almost impossible. You have to be out, you have to be visible.

“I don’t think there’s a way to do it from D.C., and I expect she’ll probably be here in Hawaii for the rest of the campaign — or at least she should be,” he said.

Hanabusa declined requests for an interview last week, but her campaign said in a written statement that its polling paints a very different picture.

“Our own Hawaii-based polling from the same time period shows that Colleen Hanabusa still has voters’ support by a strong margin,” the statement said. “We are grateful and humbled by the outpouring of support for Colleen’s proven leadership and her plan to take action and build a better future for Hawaii. Reception on all islands has been positive, with several of our events filling to capacity.

“The incumbent’s strategy to try to capitalize on ceremonial bill signings and take credit for the accomplishments of others is not fooling voters,” the campaign statement said. “What we are hearing and seeing with our own eyes is that the people of Hawaii are demanding leadership, accountability and action.”

Ige said the only poll that truly matters will be the votes cast on election day, but said he has “definitely” seen a change in the public response to his campaign events.

“Certainly we have seen the momentum change,” Ige said. The latest polling data is “a testament to the real hard work of the hundreds of volunteers and supporters that have been with the campaign from the very beginning.

“We continue to work to make sure that we can touch as many voters, be able to tell the true story of all the work that we’ve done in this administration to really improve the lives of our people,” he said. “That’s what we believe it’s all about.”

When asked if the political impact of the false missile alert is waning, Ige said, “I think that people have gotten over it, if that’s the word you want to use, but I do think that people are realizing that being governor is more than one incident, right?

“It really is an accumulation of all the decisions that one needs to make, and to really focus on one incident in the context of what happens in my service to the people of Hawaii every day, year in after year out, people are recognizing that it should be more than just one incident,” he said.

With almost a month left to go in the campaign, the race could easily go either way, Coker said.

“It’s still a close race, but clearly Ige has a little bit of momentum going, and probably where we would have counted him out a couple of months, he’s clearly back in it,” Coker said. “You still have 16 percent undecided, so as well as things have gone for him, there’s still enough voters out there that they could go the other way and Hana­busa could come back.”

The 16 percent of the voters who say they are unsure who they will support is not surprising “especially given the way that this race has shifted,” Coker said. “Anytime you get the political winds suddenly shift the other way, it does create some voter uncertainty.”

Moore said he expects to see a harder edge to the Hanabusa campaign advertising in the final weeks before the primary as she attempts to make leadership the clear, central issue of the campaign.