Candidate profile: High and lows won't stop Ige from running for another term 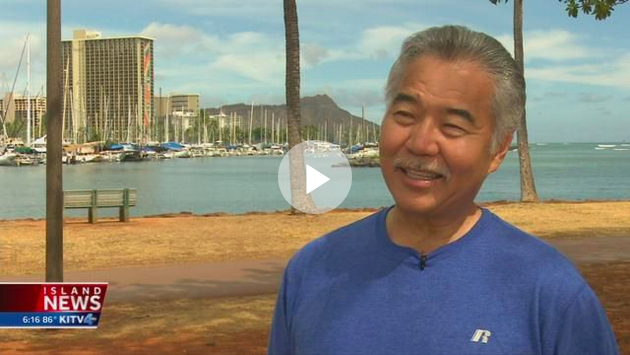 A calf injury has slowed Governor Ige from his usual running routine, or else he'd put on his running shoes and hit the streets.

"I took up running 20 years ago, a lot of it was to get out and exercise. I just find it allows me to clear my head and think about the issues before me, and sometimes the best ideas come when I am running," said Governor David Ige.

But nothing has slowed down his re-election campaign as he runs for another four years as Hawaii's leader.

"There is no other job like being governor. It is the one job where you have the opportunity to make a difference every day," said Ige.

During the past three and a half years, Ige feels he has made a positive difference, especially in helping with Hawaii's housing crisis.

"We really streamlined the process and removed roadblocks, so we are producing more housing and more affordable housing than there has been in decades," Ige explained.

Education part of that as well--such as cooling classrooms and giving Hawaii high schoolers a head start on college, with the early college credit program.

"Just seeing those kinds of programs really, where it is life changing for families, and it is life-changing for students, is really one of the joys of being governor," Ige said.

Along with the joys there have also been challenges, everything from a false missile scare, to a very real volcanic eruption-that had the governor flying back and forth each week to the Big Island.

"I needed to be involved and on the ground so we could make decisions in a timely manner to ensure the health and safety of the community," he said.

But his efforts have also earned him critics.

Ige went on to say, "People want to blame me for the things that don't go well and discredit me for the successes we have, I'm happy with either. The most important thing is we are making changes to improve the quality of life in the islands."

Now, he would like another four years to improve Hawaii for future generations.

"It really is about creating the Hawaii we want to leave for our children. Sustainability and transformation of our energy systems, protecting our watersheds and our oceans."