We All Make National News, Again! 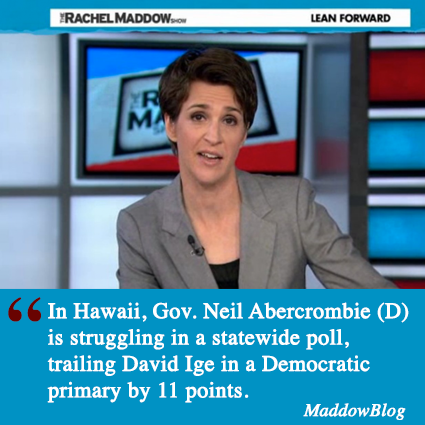 National political reporters are taking more and more notice of our campaign because of the work we're doing together! Two national publications mentioned us this week.

After The Washington Post named our race one of the most exciting in the country, MSNBC's Rachel Maddow took notice of last week's huge polling news on her website:

"In Hawaii, Gov. Neil Abercrombie (D) is struggling in a statewide poll, trailing David Ige in a Democratic primary by 11 points."

"The poll numbers are the culmination of a dramatic turn of events for the incumbent governor who has raised millions for his re-election campaign and is advertising heavily."

These stories are about David, you and me pulling together to do what is right for Hawai'i.

Can you pitch in $25 to ensure we make winning national headlines on August 9?