Ige Cruises To Re-Election As Governor

Democratic Gov. David Ige was well on his way to a second four-year term as Hawaii’s chief executive after the first wave of election results Tuesday evening.

The Associated Press called the race for Ige before the first results were even released. 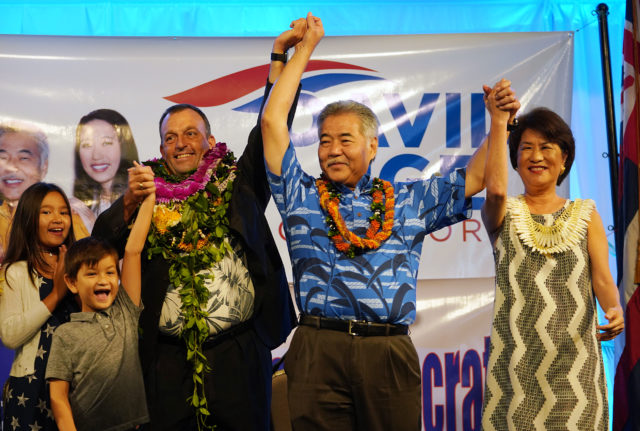 A couple hundred supporters of Ige and other Democratic candidates loosely filled a stale ballroom at Dole Cannery to watch the election results come in, enjoy the buffet table, listen to music and hear political leaders speak.

It was a remarkably early night for Democrats, the vast majority of whom had races called early because they had such commanding leads after the first round of results.

The attention was as much, if not more, focused on what was happening nationally, with Democrats taking control of the U.S. House along with several legislatures and governorships, while Republicans held on to their Senate majority.

Ige, addressing the crowd shortly after 8 p.m., said he was proud of the work his administration has done in Hawaii but also nationally, in terms of court cases his attorney general filed against President Donald Trump.

“We stepped up to a president and the Republican Party who is taking our country in the wrong direction,” Ige said.

The governor was emotional in his remarks, pausing to collect himself as he stood next to his wife, Dawn. He said it has been a long journey for the Ige family, and they had a conference call to talk just before he took the stage.

“The work just begins tonight for the next four years,” Dawn Ige said.

The governor, 61, battled through a tough August primary against Congresswoman Colleen Hanabusa to advance to the general election.

Hanabusa had the backing of major unions and the state’s top legislative leadership, including House Speaker Scott Saiki and Senate President Ron Kouchi. The public will be watching to see how successful Ige can be working with the Legislature when its next session opens in January.

Hanabusa mostly attacked his leadership style, pointing at his poor handling of the false missile alert that terrified thousands of people across the state for 38 minutes on a Saturday morning in January.

But his administration recovered from that incident, replacing the emergency management officials who triggered the false alarm and oversaw that agency. He subsequently benefitted from natural disasters — flooding on Kauai and a volcanic eruption on Hawaii island — that let him demonstrate his leadership and did not expose himself to any other major misfirings that his opponents could criticize.

The former state senator, an engineer by trade, has governed the state during a time of record-low unemployment, strong bond ratings and a scandal-free first term. He has touted his sustainability initiative, which includes doubling local food production and making the state carbon neutral by 2045, and his support for public school teachers — a major union endorsement.

Tupola, 37, is a hard-working, charismatic up-and-comer in the beleaguered party, which held just five seats in the 76-member Legislature. But with limited campaign funds and little name recognition, she struggled to sway voters in an overwhelmingly blue Hawaii. Only one other Republican, Linda Lingle, has held the governor’s office since 1962. 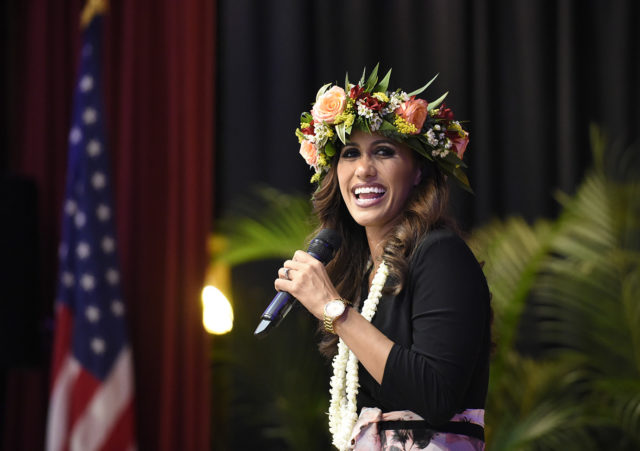 Tupola hit Ige for the state’s extremely high cost of living, which has been forcing residents to move to the mainland in search of affordable homes and a better public education system to avoid paying for private schools, a popular option in the isles.

It’s a long-standing problem with no easy solutions, but voters are still putting their faith in Democratic candidates to fix it. 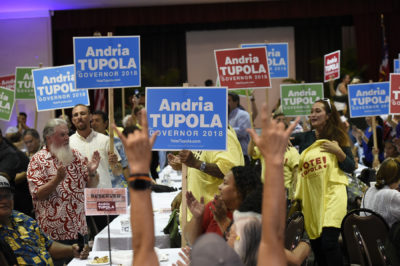 “This movement has started, because this isn’t a campaign, this isn’t Andria running for office. This is Andria inspiring the hearts and the minds” of local residents, Tupola, wearing haku lei, told an audience of mostly young families hailing from Waianae and Kahuku.

“This first printout, the gap is huge,” Tupola added. “The gap will close, but I don’t think it’ll close to the amount that we need. But I can tell you right now that what we were supposed to do, we did it.”

Tupola received scant help from her running mate, however. Whereas Ige and Green presented a united front, Kerns questioned Tupola’s conservatism and did not attend their last joint debate (she blamed Tupola for not inviting her).

Ige has a tall order as he prepares to head into a second term. Aside from moving the dial on goals outlined in his sustainability initiative, he has also promised to build 10,000 new housing units by 2020 while building upon the last two years of reducing homelessness.

With a new superintendent leading the nation’s only statewide public school district, Hawaii families will be watching Ige’s administration to see if the education blueprint he touted on the campaign trail actually brings positive results.

The state’s infrastructure requires billions of dollars in repairs as it currently stands. And a state report last year projects $15 billion more is required to adapt to the threats of climate change, including forecasts of rising sea levels, stronger storms and more intense flooding.

It’s unclear how the Ige administration plans to fund those needs, but residents are already feeling the effects despite Band-Aid solutions, like temporary seawalls on the north shore of Oahu where the ocean is eating away portions of highways.

Ige has remained committed to the state mandate of getting 100 percent of its electricity from renewable sources by 2045 — and he still does not want liquefied natural gas to be used as a transition fuel. Residents have applauded that goal but also want relief from the nation’s highest electricity costs, so will look to anything the governor can do to help.

In the near term, the governor will likely face protests again over his administration’s approval of the Thirty Meter Telescope atop Mauna Kea. The courts recently cleared the way for the $1.4 billion TMT project to begin, and many Native Hawaiians have vowed to prevent construction on a site they consider sacred.