Ige Ahead Of Hanabusa In Hawaii Governor’s Race

Buoyed by support from moderates and Japanese-Americans, Gov. David Ige has surged ahead of Congresswoman Colleen Hanabusa in the latest Civil Beat Poll.

Ige had 43 percent support from likely voters, compared to 34 percent for Hanabusa. That’s a 15-percentage point swing from Civil Beat’s May poll, when Ige trailed Hanabusa by 6 percent.

The most recent poll was conducted July 19-21 among 871 likely voters in the Aug. 11 Democratic primary. The margin of error was plus or minus 3.3 percent.

Matt Fitch, executive director of Merriman River Group, which conducted the poll for Civil Beat, said the poll shows Ige has improved his standing significantly and owes most of his growing support to the Japanese-American community.

“That group is likely to be a deciding factor in what happens,” he said.

Both Ige and Hanabusa are Japanese-American. Ige also takes particular pride in his Okinawan ancestry. 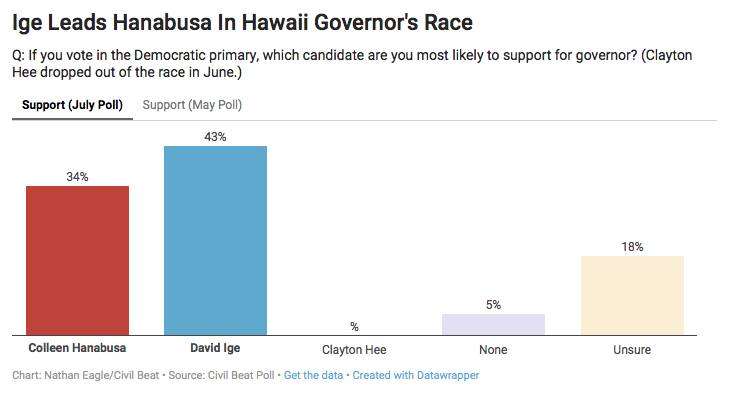 When Civil Beat polled in May, former state Sen. Clayton Hee was still in the race. He dropped out in early June after struggling to raise campaign funds.

Fitch said a three-way race generally is more beneficial to an incumbent.

“The fact that he’s improved his standing with (Hee) out goes to show that for better or for worse he’s not the typical incumbent,” Fitch said.

In the May poll, Hanabusa had 33 percent of the support from Japanese-American voters compared to Ige’s 35 percent and Hee’s 11 percent. In the July poll, Ige’s support surged to 55 percent compared to 26 percent for Hanabusa.

Ige held sizable leads across all ethnic groups aside from Hawaiians, a small voting bloc that Hanabusa led by 11 percent, and whites, in which she had just a 1 percent advantage.

Ige “has been a very good governor. To me, he radiates confidence,” said Beth Flint, 63, of Kaneohe. “I’ve appreciated his moral support of kids at the state science fairs. I am very impressed by his commitment to sustainable energy and solar power and environmental stances in general.” Ige similarly increased his support among moderates and conservative voters while gaining an edge over Hanabusa among liberals and progressives.

Ige also fared better than Hanabusa with female voters, with 40 percent support to her 32 percent. He had a 10 percent lead among males. 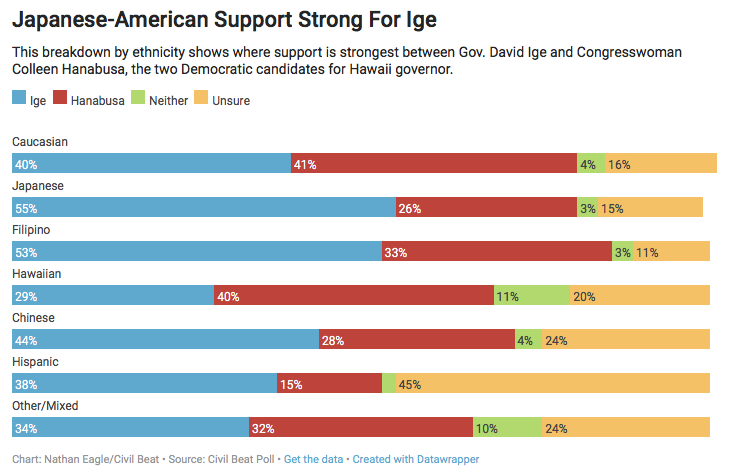 One of the few categories Hanabusa did lead was among voters under age 50, in which she had 32 percent support to Ige’s 28 percent. Among voters 50 or older, Ige had a 15 percentage point lead.

Hanabusa led among voters who earn less than $50,000 a year, which is considered low-income in Hawaii.  Ige led by double digits among middle-class voters and wealthier voters.

Geographically, Ige did best on Kauai when compared to Hanabusa. He had 58 percent support there to her 21 percent. On Oahu, where the vast majority of voters live, Ige had a 14 percent lead in urban Honolulu between Kapolei and Hawaii Kai while Hanabusa had a 1 percent edge in rural areas.

Ige, a 61-year-old Pearl City resident, is an engineer by trade. He juggled his private and political careers for about three decades while serving in the state Senate before his shocking upset of incumbent Democratic Gov. Neil Abercrombie in 2014.

Hanabusa, 67, who grew up in Waianae, was a labor attorney for years before entering politics in 1998. She served in the state Senate before winning a seat representing urban Oahu in Congress in 2010. She lost a bid for U.S. Senate in 2014 and returned to Congress in 2016.

“I don’t think Gov. Ige has provided the kind of dynamic leadership that the state needs,” said Hanabusa supporter Brad Bate, 76, of Hawaii Kai. “I think he’s been weak in the follow-through and I was not too pleased about the missile alert business. Colleen is a smart lady and she’s been around a long time and looked at things in a state and national perspective.”

Margaret Baker, 73, of Honolulu, voted for Ige last election and still supports him.

“We’re not at the far wing at either end of the spectrum,” she said, noting that she used to work for Republican candidates.  “We just want some good government that’s not being paid off.”

“I like engineers,” she said. “I’m a physicist myself.”

Fitch, the pollster, said Ige seems to have gotten out of the bad spot he was in earlier.

A Honolulu Star-Advertiser poll also found Hanabusa’s lead to have dissipated over the past four months. In March, the newspaper’s poll had Hanabusa winning by 20 percentage points. In its July 6-11 poll, Ige was winning by 4 percent.

Political analysts have observed how Ige’s numbers have improved the farther away he gets from the false missile alert in January.

Many residents went into panic mode when a Hawaii Emergency Management Agency employee accidentally triggered the alarm during a training exercise. It took 38 minutes to officially retract the message that was sent out to people’s cell phones.

Hanabusa’s campaign is trying to remind voters of the incident, with campaign ads that attack Ige for mishandling the false warning.

In the Republican primary race, state Rep. Andria Tupola has a strong lead over former state lawmaker John Carroll. She gathered 39 percent of the support among likely GOP voters compared to 22 percent for Carroll.

Ray L’Heureux, a former state Department of Education assistant superintendent, trails with 4 percent. Nearly 22 percent were still unsure about who to support in the Republican primary.

Tupola does far better than the other two candidates in every ethnic category and leads among moderates and conservatives. Carroll has a 1 percent lead over Tupola among liberal voters.

The Republican poll is based on a survey of 219 likely voters in the GOP primary and has a margin of error of 6.6 percent. It was conducted July 19-21. This is Civil Beat’s first poll of the GOP candidates.

In a Honolulu Star-Advertiser poll in March, Carroll led Tupola with 40 percent to her 28 percent and 32 percent were undecided. In the newspaper’s July poll, Tupola had taken the lead, with 41 percent support from likely primary voters to Carroll’s 28 percent.