Gov. Ige touts his record as primary challenge against Hanabusa heats up

Faced with the mounting traction of a primary election challenge from U.S. Rep. Colleen Hanabusa, Gov. David Ige swung at a lobbed softball question during a recent interview at The Maui News.

What would he like to tell Maui County residents?

“I’m not a typical old-boy politician who, you know, cuts secret deals for special interests,” he said Jan. 27. “I am an innovative, collaborative leader who believes we should engage the public and our public employees to get things done on behalf of the people of Hawaii. I feel proud of what we have done, the leadership we have shown in many areas that I believe the state can be proud of.”

He pointed to his administration’s goal of producing 10,000 new housing units statewide by 2020.

“Housing is a big challenge, and we’ve taken it on,” he said. “We have changed how the state supports affordable housing to facilitate development of affordable housing, and to date we’ve completed 5,300 new homes statewide, of which about 40 percent of that was affordable, so more than 2,000 affordable homes.” 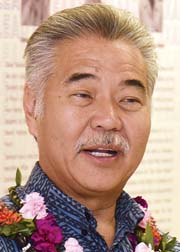 How many of those units were in Maui County?

“I can get you that,” he said. “I knew (the question) was coming, and I knew I should have an answer.”

The answer was not forthcoming until The Maui News followed up Friday via email with an official in the Governor’s Office. Later, a spreadsheet titled “Housing Production Report” showed Maui with one completed project, the 56-unit “Kulamalu Affordable Family” project. It represented 1.7 percent of the 3,194 completed affordable housing units on the list. Projects in Kakaako in Honolulu amounted to 1,416 affordable and 1,924 market-priced units on the list, for a total of 3,340 units, or 62.2 percent, of the 5,367 completed units overall.

Hawaii island was listed with 166 affordable units completed, and Kauai had 134 units. Oahu had another 1,422 affordable and 249 market-priced units on the list.

In the “in construction” category, Maui has 39 units at the Hale Mahaolu Ewalu project. (The total “in construction” was 2,426 units, including 1,477 affordable and 949 market units.) And, in the “planned/pending category,” Maui has three projects — Kenolio Apartments, 186 units; Kahului Lani, 82 units; and Kaiwahine Village, 64 units. (The total “planned/pending” list has 4,655 units, including 3,050 affordable and 1,605 market.) Most of the homes being built or planned are on Oahu.

“We feel very good about our goal to complete 10,000 new housing units statewide,” he said.

When asked to respond to the perception that state government is “Oahu-centric,” Ige said he has heard that for a long time.

The governor said his administration facilitated the transfer of Maui Memorial Medical Center and other public hospitals in the Maui Region from the Hawaii Health Systems Corp. public health system to the Kaiser-affiliated Maui Health System; directed the state Department of Transportation to identify solutions and prioritize highway projects; and backed construction of the new $340 million consolidated rental car facility at Kahului Airport.

He described that project, expected to be completed in October, as “the biggest public works project on Maui in the history of Maui.”

When asked about the gathering political forces in support of Hanabusa, including her endorsement by fellow Democratic Congresswoman Tulsi Gabbard, Ige said he sees it as “the normal process in the campaign.”

“You know, I’m seeking and asking for various members in the community to support our campaign and my candidacy,” he said. “And, you know, we’ve gathered a good collection of community members to support (me). . . . I think that we have a terrific story to tell. . . .

“It’s easy to talk and criticize different things, but you know we have taken action, exerted leadership and delivered services to the community. And I’m confident as we go through the process, that as we lay out the things that we have actually been able to accomplish that, you know, people will support me for governor.”

As for his administration’s accomplishments on Maui, he discussed the transition of public hospitals in the Maui Region to Hawaii Health Systems, a process that was delayed a year by public union legal challenges.

When asked about the yearlong delay in the hospital changeover, Ige said: “Clearly, the court. . . . There was a lawsuit. The court ordered us to stop. We would have implemented the year earlier, except that we have to live with the rule of law. And the court ordered us to stop. And we stopped the project, and we were able to negotiate a settlement with the unions that allowed us to resume.”

Hanabusa has used the word “rudderless,” to describe Hawaii’s position under Ige’s leadership.

The governor chaffed at that, again citing the hospital transition as an area of sound leadership and the launching of the “Sustainable Hawaii Initiative.”

“Hawaii is still the only state in the country committed to 100 percent renewable energy,” he said. “How can people talk about the state of Hawaii being ‘rudderless?’ We are leading the country. We are the first state in the nation to commit to the goals of the Paris Climate Agreement. I stepped forward and joined the U.S. Climate Alliance. We understand what global warming means and what the impact that global warming has on our beaches, coral bleaching, everything that’s involved with that.”

The sustainability initiative also calls for doubling Hawaii’s food production, an important movement as the islands “transition and shut down all the plantations,” he said. “We are focused on producing more of the food that we eat. We’ve initiated an invasive species authority because we know we have more endangered species in Hawaii than any place else in the world.”

Ige said his administration has led the first interagency biosecurity plan to keep away invasive species; has been committed to protecting watersheds and the ocean; and has led in development of a blueprint for education.

“You know the old, one-size-fits-all drove our public education system for too many years,” he said. “We’ve embraced the notion of school empowerment and that every school should really be driven by those closest to the children, the community and the educators that are at the school.

“We know that top-down just doesn’t work,” he said. “I mean, the needs of Lahainaluna or Baldwin or Maui High is very different than the needs of Waialua High School or Pearl City or Moanalua. And it really is about getting the resources to the school level so that they can make the most important decisions on behalf of the students.”

Ige said he’s promoted the “Early College” program to allow high school students to take college-level courses while in high school and get an associate of arts degree before graduation.

“I really believe that it’s a game-changer for our public school system,” he said, pointing out that families can save up to $7,000 or $8,000 in college tuition with the program.

“So, you know, I don’t know what this ‘rudderless’ is,” he said. “Maybe when you’re at Congress, you don’t pay attention, and you get disconnected. But clearly, we’ve made strategic decisions. We have priorities. The state is moving forward, and we’re getting a lot done.”

* Brian Perry can be reached at bperry@mauinews.com.